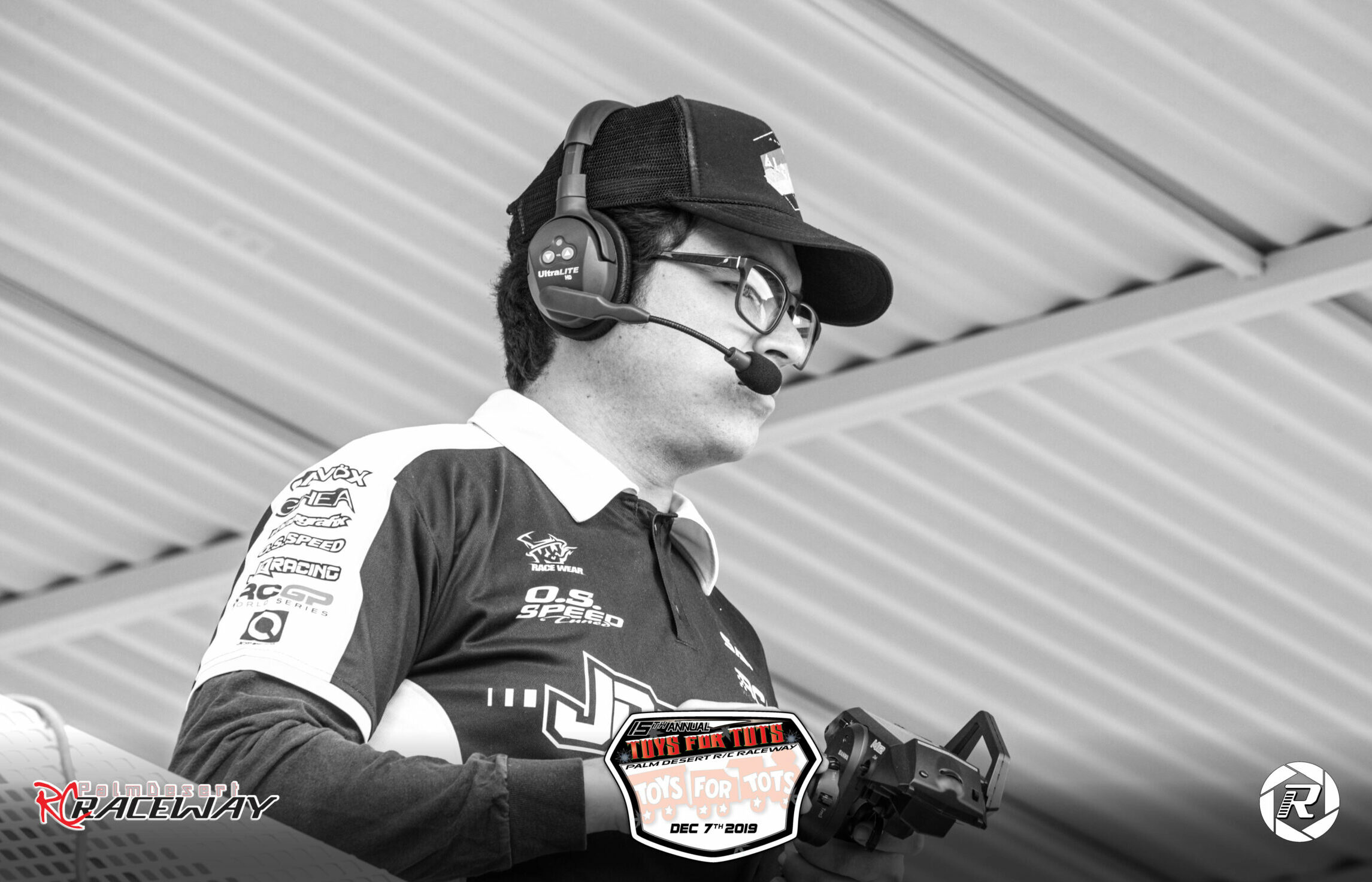 I didn’t see the point in creating race reports for races that are almost a year old. For one, I don’t remember the details and two, race results arent relevant for too long. You have a good result and its only good until your next race and if you have a bad result, well, there is another race soon enough that you may use to redeem yourself.

Anyway here are the highlights from my racing this year, enjoy!

I had absolutely no intention of racing. Prior to this event, I hadn’t driven my car in almost a year. I only had break-in fuel (20% nitro) and two sets of tires – M3 Blockades. Anyway, my old friend Chris Marrale stopped by my place on his way to DNC and dropped off a bunch of spare parts to rebuild my car and also some new setup ideas I should try. I really had no excuse now.

I made the modifications, rebuilt my car and made it to the track Thursday night. I chose to race in the sportsman class: big event + I hadn’t raced in a while + this way I can easily pit for Chris who is racing in open = Logical. A bit sand-bagger-ish, IDC.

I qualified 5th in the b-main. I recognized all of these characters from years ago racing JBRL races all over SoCal. I cruised around, only focused on not crashing, and finished 3rd. Good enough for the last bump spot into the A-main.

On that start of the main, I had a really lucky start and got up to the top 3? 5? Somehow, in all the excitement I lost sight of my car and fell to last. The track was ridiculously bumpy and I just focused on not crashing. Eventually, I made it back to the lead only to make another lame mistake at the end of the race to finish 2nd.

Not a bad result. I had a really fun time. My car handled well, THE Engine ran awesome, and two sets of good tires were enough.

In preparation for RCGP, I built a new JQ BLACK Edition and got a new “Protek” short-stroke O.S. Speed engine. Other than running the car on the street to break-in the engine I had not driven an R/C car since DNC. Same old, same old.

Thunder Alley is an awesome facility. I started going to this track when they first opened in, 2006? I’ve raced there countless times since then. It’s awesome to race there at night. The track looks really good with the lights on and when the sun goes down the dirt holds moister and has really good traction. At times the “groove” is from pipe to pipe. My Grandpa took me there to watch the nationals in 2008 and again in 2011. I’ve had a lot of good time at this track.

This RCGP event as a whole was awesome. It really deserves its own post. I raced in the RC2 class, which was open to all drivers minus paid pros. It was very competitive. The A-main group was almost the same line-up as any other expert A-main at any Socal Event. Knowing this, I didn’t feel too much pressure. I saw the entry list on-line and thought a top 40 finish would be a good result for me.

I ended up qualifying 1st in one of the 1/8 finals. At this point in the event, I was feeling confident in my car and with my driving. The only setup changes I made were rear spring, one step stiffer, and 0.1mm heavier rear sway bar. This was a great feeling – my car was dialed in and I only made a couple of really small changes to make it near-perfect.

I ended up leading every lap except during the pit stops and bumped to the 1/4 final. For the 1/4 I went 2.5wt heavier shock oil front and rear because It felt like my shocks got hot toward the end of the 1/8 final and the car got a bit bouncy. I had a rather uneventful race and finished 6th which was good enough for 27th overall. A solid result for ol’ dhoff.

I was at the race. I made the main in Intermediate. IDK where I finished or what happened. I remember I was in a bad mood and took absolutely fuck all for photos.

Another race at Thunder Alley. I was feeling confident going into this one. My car setup was really dialed in and my engine had been running great. This was also the first race for my old pal Les and his new JQ buggy. He went all out with an O.S. speed engine and KO H.C. servos.

Friday Practice: My car felt okay but lacked steering for the tighter sections of the track. Also, my engine didn’t have enough power to safely clear the triple jumps.

Throughout qualifying on Saturday I made a bunch of changes: Stock BE front shocks and shock tower, 18-degree caster blocks, different ackerman plates, wing, and tires. I also changed to a larger carburetor venturi, heavier clutch, and a different pipe to make more power. I was too slow to make these changes and qualified 18th but felt confident for the mains.

In the b-main, I got to the lead quickly and led most of the race. I got caught up with a lap car at the end and ended up second. So, I’ll start last in the A which was fine with me considering there is likely to be a pile-up in turn one at the start of the race.

The Intermediate A-main event was 30 minutes. As expected there was a pile-up at the start and I picked up a few spots. After that, I was just driving around and then a picked up a couple more spots. I started to get really tense, thinking, “I started 12th, now I’m 7th before the first pit, I might be able to get a good result… maybe podium..” blah blah blah. Then I thought, “just focus on how good your car is handling, how good the track is, how good your engine running.” Then, I got relaxed and the rest of the race, about 20 minutes, was great. I drove really good and had clean pit stops. Ended up getting 5th.

I have absolutely no idea where Les finished. I remember he complained about his car being loose almost all weekend and we made every adjustment possible to add rear grip. In his main event, he was happy with his car.

I had full intentions of going to Friday practice before the race. But, I had some work to do at the shop, it looked like it was going to rain, and I’ve turned a shit load of laps at this place in the past so I felt ok with just turning up race day.

Palm Desert RC Raceway will get its own post. I practically grew up here. The very first time I drove a 1/8 nitro buggy was at this track when Hobbytown owned it. It had opened then closed several times back then. Chris Marrale owned it for a good while and that is how we met. Now, Anthony Westergaard and a couple of other guys own it and the track has been restored to its former glory!

I ran the same setup after Buggyland. Since my car had good steering there and this track has some tight sections. I did change my engine setup back to normal with a small carb restrictor and mellow clutch and pipe.

In qualifying I did ok, my first run was solid with moments of being on TQ pace but I couldn’t maintain. The second one started off with bad traffic so I used it to try different lines on the track. I was set to start 10th in the Intermediate A-main but felt confident that I would move up.

Les was there in full effect. He chose to race the sportsman class. In contrast to our last outing, All Les complained about was how the car pushed. In his first qualifier, he was all over the track, over driving – which really hurt you on this layout. After Q1 he was way down in the rankings. We made a couple of adjustments: Lowered the front camber link on the tower and changed the Ackerman plates to get more steering angle at full lock. In the second qualifier, Les was like a brand new man, on a pace to set a new TQ time by nearly 5 seconds. It all went to his head in the last couple of laps and he made a couple of bobbles that knocked him down to 5th. Not bad.

Steve Burgess of Rugspin raced Les’s practice car, which was my old race car, the one from DNC. Steve raced in 40+ class. He had clean runs in qualifying but still ended up in the B main.

I never understood why those 4 port Nova’s were so popular.

In the sportsman A-main Les made a great start going from 5? to 2nd? Something like that, but crashed and bent a front shock shaft on the third or fourth lap. I changed the shock as quick as I could and he finished the last 10 minutes of a 15 minute race. After the repair, the pressure of getting a good result was lifted and Les drove very well.

I pit for Steve in his 40+ main, but I don’t remember any details. He drove well and the car and engine stayed working as they should. I think he got 8th? Anyway, It was good to see Steve racing offroad. I met Steve in 2000 or 2001 at one of my first R/C races and He’s always been one of those helpful Guys to have at the track.

In my race, I started 10th and got up to 3rd on the start. I was close to the leaders but they were just a little bit faster. Then I had a good race with Kevin Kasten for 3rd-4th. Another guy got involved and we were racing for 3rd-5th really close. I ended up getting wheeled several times by the same Kid. I fell down to 9th before the pit stop. After the pit I thought that same thing as last time: “Just focus on how good your car is handling and how great the engine is running, the track is really fun, and I can outdrive these guys when I catch up…” I was able to get back up to 5th by the end of the race by passing 4 cars cleanly. One car I drove around on the back straight – O.S. Speed FTW!

That’s it for this year – I’ll be back for some practice in January and then DNC in February!