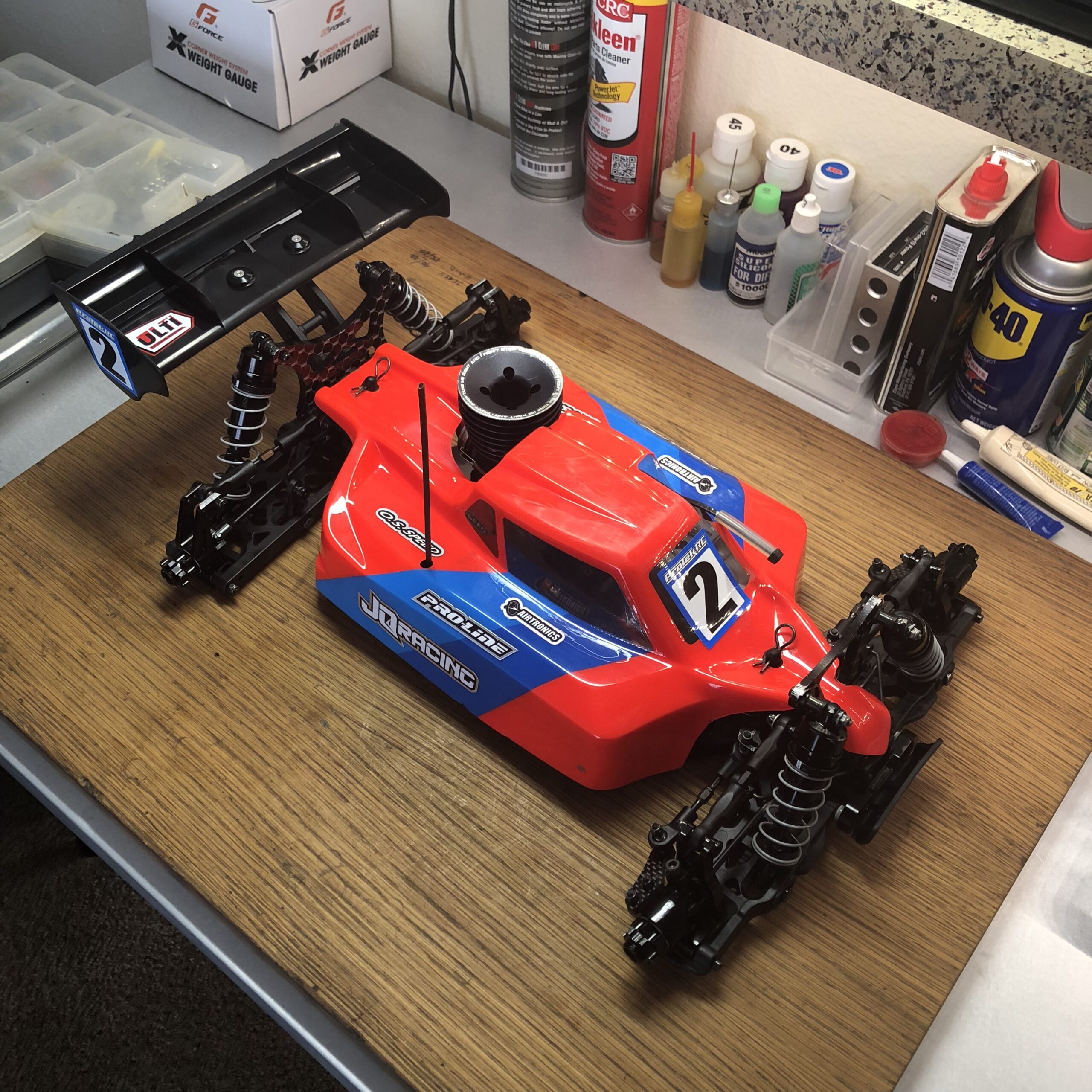 I have raced a lot of RC cars. I started in 2000 and since raced on-road, off-road, electric, and nitro-powered vehicles on just about every surface and track-type imaginable.

1/8 nitro buggy has always been my favorite class. Most of my driving experience has come by racing these cars in the very competitive SoCal area. I enjoy that the cars are very technical, yet so robust and can withstand some serious abuse on the track.

There are a lot of chassis manufacturers, engine makers, electronics, tires, and fuel to choose from. Over the years I have tried all of them or at least all of the good ones and I have found these brands to be the best.

My First buggy was an Ofna Hyper 7 pro in 2003 and since I have raced all of the cars: Kyosho, Mugen, Associated, TLR, Xray, Hot Bodies, O’Donnell… I even had one of the very first JQ buggies.

I choose to run the JQ buggy for two reasons: The Car and the Brand. First, the car: I’ve been running JQ buggies since 2014 when I got my first WHITE Edition. My first impression was that the car was as good as the MP9 I was racing before. Then in 2017, I got my first Black Edition. This car is really good. Out of the box, the car is easy to drive with a neutral steering feel and only requires a few option parts (+1mm & +2mm wheel hexes) from JQ to be dialed.

Next, The brand. This is really why I choose to run a JQ buggy. There is no other racing brand that provides that same value as JQ. He has written countless articles on his blog about all aspects of racing and car setup. He has made countless FB Live videos explaining new option parts, answering the viewer’s questions, and explaining some of the theoretical aspects of car design. Obviously this information can apply generally to any car but it is extremely valuable to get this sort of insight from the designer of your specific buggy.

This year, 2019, has been the best year in regards to having a well set up competitive car. I remember in years past I could get my cars sorted out well but they were always lacking a bit, usually too “nervous” and I never felt super confident. It is amazing how much more enjoyable racing is when your car works and all you have to do is drive.

I love engines. When I was getting started in 1/8 nitro all I cared about was how the engine was running. I wanted maximum RPM’s at all times. I liked O.S. from the beginning because that was what the Pro’s ran but I was also obsessed with the latest-greatest engine. Just about every other engine I ran was an O.S. I’d try a Werks, then got a V-Spec. I had one of the original CRF Orions then got a Speed 2. Then I tried the latest Nova engine then got an XZB. That blue head XZB worked really well for me – great power and really easy tuning. That engine ran so well that I stopped trying other engines. Since then I’ve had three short-stroke Speed engines and three of the long-stroke variety. These engines, especially the short-stroke versions have a very linear powerband – little throttle input = little power – more input = more power. Also, the tuning is really easy – especially if you use the O.S. pipe. The O.S. pipe works well with the carburetor to produce the perfect fuel curve, where when you pull the throttle slowly and the RPMs climb the engine always has the same air/fuel ratio. I’ve tried other pipes for more power like the werks 2058. It made maybe 10% more power, very noticeable, but the fuel curve was all jacked up – horribly rich at 1/4 throttle.

My first transmitter was an Airtronics M8. I actually had two of those both of which the screens died on. After that tried a bunch of radios like Futaba, KO Propo, Spectrum, blah blah blah. They all worked ok but nothing special. Then one Christmas My Dad got me an Airtronics M11x. On the track, I could immediately tell the difference – the feeling of connected(-ness?) was un-real and the feeling in the hand, the quality, was amazing. Eventually, I upgraded to the Sanwa M12 and it has been working flawlessly.

I started using KO Hard Case (H.C.) servos in 2012. Prior to that, I tried all of the popular brands; Hi-Tec, Savox, Airtonics, JR, etc. etc. I remember the Airtonics would break just by looking at them wrong. It seemed to me at the time that all the servos were all-around $100 and all performed about the same and broke as easily. The KO’s were $200 for their top of the line servo in H.C. variety. Yikes. Luckily, I tried them. I never broke a servo again. I had the same pair that lasted 3 seasons of racing in SoCal – about twice a month for me. I would just send them in to be serviced at the end of the season and they kept going strong. That’s two servos that outlasted three chassis! They are expensive but when compared to the total cost of racing it’s nearly irrelevant and so worth the peace of mind. Oh yeah, spend the extra for the aluminum case versions. I am convinced that the extra rigidity has everything to do with the improved durability.

Fuel: Anything with a Castor / Synthetic Blend

There really isn’t a cool photo of a quart of fuel. Anyway, I’ve used O’Donnell, Sidewinder, Byrons, Nitrotane, Werks, VP, and even experimented with my own homebrew – not worth the hassle! Since all of the fuels offer the same nitro content (30%) the biggest difference in fuels is the oil. The percentage of Oil and its composition make a big difference on how the fuel makes your engine run and how long the engine will last. This topic can get really deep but basically I’ve found a blend of castor and synthetic at about 9% total oil content to be the best. Currently, I use the ProRace fuel by VP. I buy quarts as the fuel will stay fresher longer.

I’ve never been too into tires. I used to only carry two types: Proline Blockades (Right in photo) with the larger pin and tread pattern for practice and racing and Holeshots (Left in photo) with the small pin and tread for qualifying and racing if conditions permit. Always in soft M3 compound and I’ll just bum super-soft M4’s off my old pal Les if we are racing in really cold weather. This year I started using Buckshots (Middle). This tire is a good halfway point between the uber-stable Blockade and the hyper-quick Holeshots. Also, the new “S3” and “S4” compounds are nice to have too because they fit in between the standard compounds. If that’s TMI just stick with M3’s until it’s cold enough to where you need a jacket then think about M4’s.