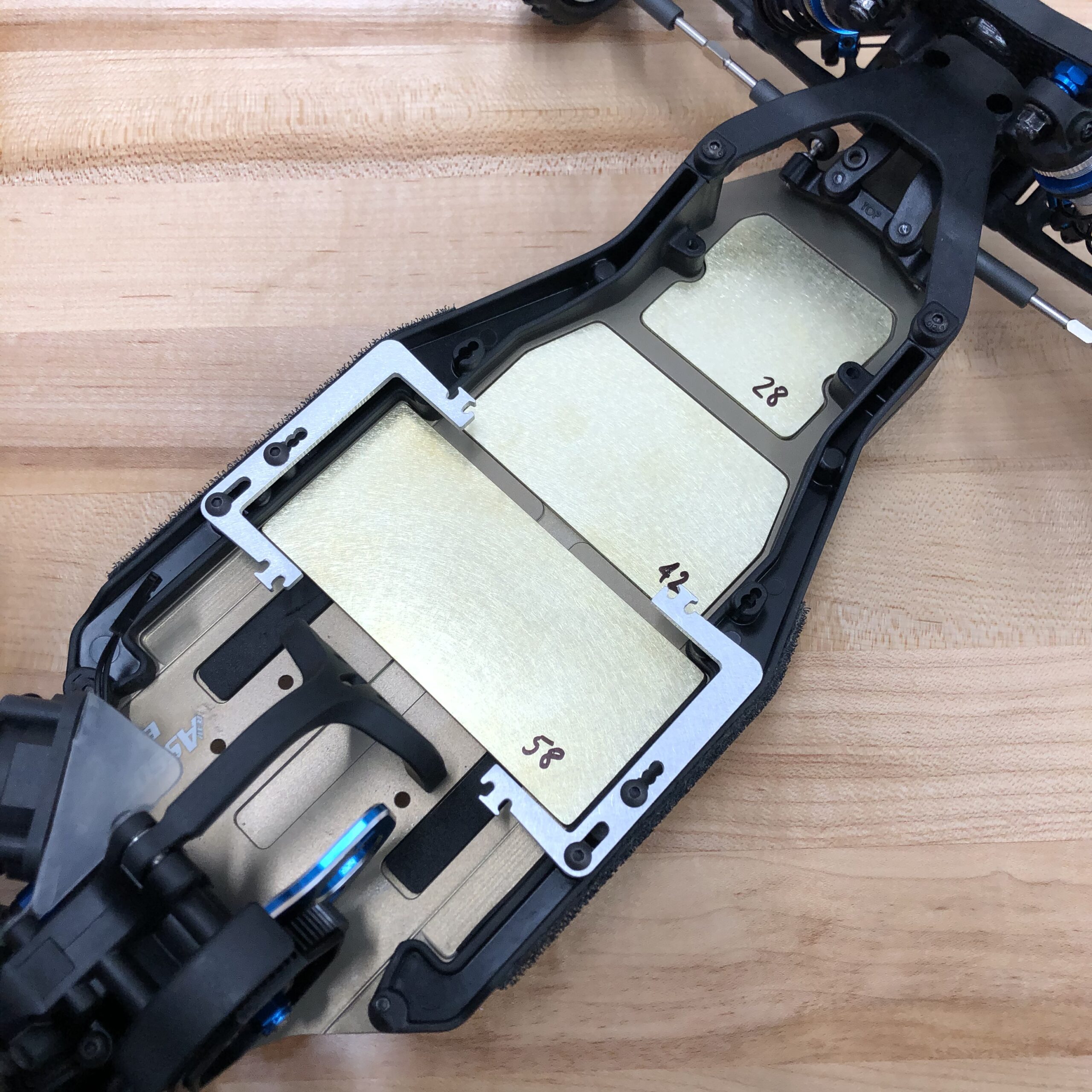 I have been racing my B6.2 for a few months now. When I first built my car I went with the standard size battery. Once I started racing I noticed that it is quite popular to run a lighter low profile battery with some sort of weight underneath. From what I’ve seen most guys are only adding enough weight to make up for the difference in batteries, but there are some modified setups where extra weight is added. Redistributing the weight this way lowers the center of gravity and in this type of racing, lower is better. Most of the weights I found online were made from either steel or brass plate so I figured it would be a fun project to make my own.

To start, I weighed my car. 1517g with 4900 mAh battery. These are new Schumacher pre-mounted tires and the rest of the car is mostly stock.

Version 1 weights – I copied the design of weights I saw online that featured windows cut out to change the where the weight is focused. I made three the same length and width as the battery and three that took up all of the space in the chassis under the battery. Once I got these done I changed my mind on the design.

Version 2 – I got to thinking that there will be a more noticeable effect on weight distribution with a notch cut into one of the long sides. After test fitting the V1 weights, I realized that the notch for the sensor wire wasn’t necessary. These weights are in 10g increments which is easier to keep track of.

I still haven’t tried the brass front bulkhead. I’m doing everything I can to make the car handle without adding 30g inline with the front axle. The car already has steel plates under the ESC and servo so remaking these out of brass wouldn’t add too much weight and also I like the idea of adding weight slightly behind the front axle. I started by laying out the dimensions of the stock chassis plates.

Drilling and tapping for M2 screws, that’s a ridiculously small tap, and brass isn’t as soft as I thought. Seems to be closer to steel than aluminum and that only made the pucker-factor worse when threading!

Chassis weights installed. I did a little Dremel work on the back edge of the rear plate just to soften it a bit where the sensor wire makes contact. These plates are good for an extra 4 grams under the servo and 6 grams under the ESC.

At the track, my lap times were very similar between the 4900 mAh standard battery and the 4600 mAh low profile pack with a brass weight underneath. I noticed that my 4600 loses some punch within only a few minutes so I’ve been opting for the 4900 for racing. The car was a touch more forgiving with the lower CG and it’s something I want to keep experimenting with. Most noticeable was running the car with the low profile pack and no weights. A bit under the 1500g weight limit but that was where the car was fastest, 0.2 seconds off of my fast lap!